Orientation at the Koins Community Center and the SRA Agriculture Projects

The traffic coming out of Mombasa was horrific. It took us a couple of hours to make it to the Koins Community Center. At one point we were stopped and saw two motorcycles collide as they drove on the side of the road. One motorcycle was knocked to the side and hit a young lady knocking here into the ditch. Fortunately she was not seriously hurt. The roads are narrow and congested and the motorcycles often whiz along on the edge of the road instead of sitting in traffic. It really makes me appreciate the roads that we have in the US. At the same time, we could learn some lessons about good communication from the Kenyan drivers. They use proper hand signals, the horn, windshield wipers, and many other means to communicate with each other.
Emily had some lunch prepared for us when we arrived. After the long ride I was very hungry and the food was very good, especially the fresh baked banana bread. After lunch we met with the Koins/SRA staff and they took us around the area telling us about their projects.
It is impressive to see what they have done in a short amount of time.We have tripled the goat herd, increased the chickens significantly, planted a huge demonstration garden, and prepared dozens of rotational garden plots.
When I was here before we cut down a coconut tree that was about to fall over because the river had undercut the bank. We used the tree to make the first goat pen. Today as we were walking around the garden we heard a huge splash in the water. I went to investigate and found that the remaining trunk of the tree and the root ball had fallen into the river. The timing of it happening is rather interesting. 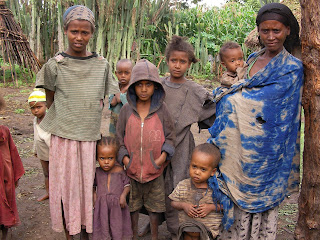